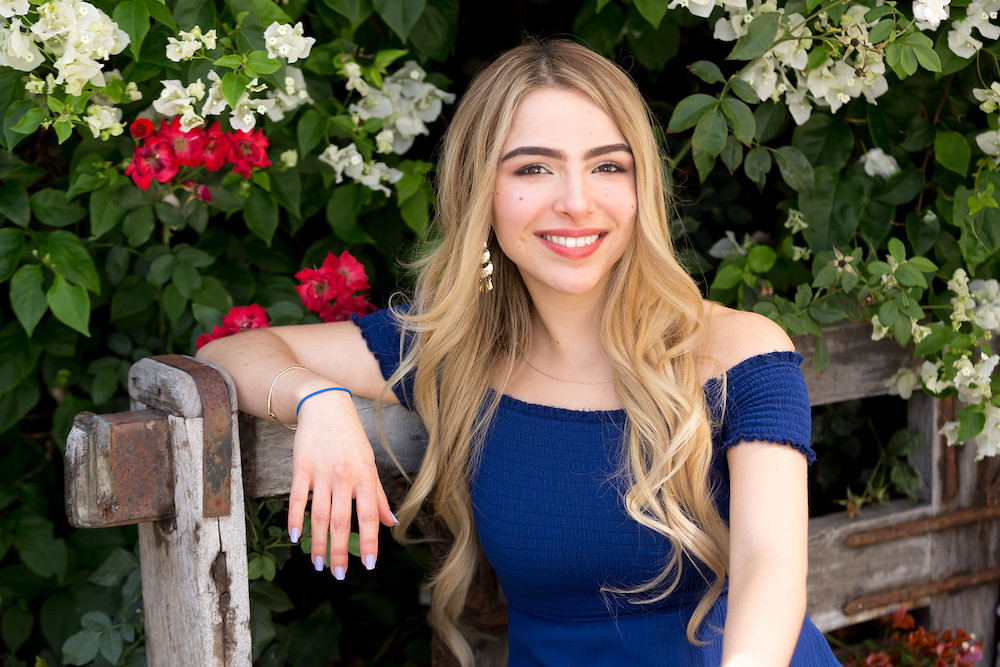 Since the launch of the Visual Snow Initiative, Hollywood celebs, music icons and leading neuroscientists have come together to address one of the least understood conditions affecting millions around the world. Founded by Sierra Domb, The Visual Snow Initiative is attempting to find a cure for what people describe as "visual snow" in their field of vision. The symptoms can be debilitating and sufferers report a wide range of symptoms including bright flashes, static and unexplained visual auras that don't get picked up in eye tests.

VSI is currently working on the development of customized lenses for suffers, and is carrying out several studies around the world. The initiative also recently launched a new research project thanks to a successful fundraiser with the support of public figures including Ringo Starr, Larry King, Sara Gilbert and Dr. Oz, raising over $126,000 in donations.

We invited Visual Snow Initiative Founder Sierra Domb to talk more about the organization's work, how it came about, and how the condition affects people.

Iain: How did the VSI get started?

Sierra: After the success of our 2018 Visual Snow Conference at UCSF in San Francisco, I recognized there was an imperative need to do more for those with Visual Snow Syndrome. Once the event concluded, people from around the world of all ages began contacting us. While the awareness generated because of the conference was a phenomenal sign of progress, I created the Visual Snow Initiative (VSI) simply because we needed tangible solutions.

Iain: What have you learned from launching the initiative?

Sierra: I’ve learnt that there is hope. In the wake of my diagnosis, I felt marginalized and fearful that people had given up on advocating for Visual Snow awareness. After going online, I discovered that there are doctors/scientists out there who not only acknowledge the syndrome but are dedicated to finding a cure for it, which compelled me to host a conference where we could deliver the facts to those affected by Visual Snow. Communicating with them online and via E-mail, I discovered a worldwide community of wonderful people who have the condition or know a loved one who is affected by it. Their stories inspired and empowered me to take action and start VSI. I have the utmost appreciation for our supporters, who are directly affected by Visual Snow Syndrome that vulnerably share their stories and give us information.

I am equally humbled by the generosity of our supporters who made a difference by donating to our cause. I am immensely grateful for and in awe of the giving nature of so many people from around the world.

PSA for VSI with El-Jay

Iain: How did you get support from people in the entertainment industry as well as leading professors and philanthropists? What was their feedback?

Sierra: We garnered support through persistence and luck. For every person who signed up for and were able to attend our Visual Snow Conference, there were a hundred who wanted to go but could not attend. We decided to hire a video production company, so we could provide a video of the conference online to make it accessible to everyone. Marton Varo, the CEO of Brandefy, the video production company we selected, became as passionate as we were about VSI. Together, we made 70 videos and public service announcements. Marton introduced us to Steven Yamin, the CEO of Conscience Entertainment. His philanthropic mission led us to social media influencers and celebrities in Los Angeles, who were extremely giving towards our cause. The accredited doctors, scientists, and researchers all recognized the importance of our mission, “Educate, Collaborate and Cure”. They all committed to speak at our Visual Snow Conference where they met each other in-person for the first time. Because of this, there is now a productive worldwide collaboration for Visual Snow research.

Iain: What do you want the VSI to achieve in the next few years?

Iain: What are some of the stories you’ve heard from others suffering from this debilitating condition?

Sierra: We have heard from people in over 38 countries. Most of the stories of those with Visual Snow Syndrome, which are told in various languages, convey that they feel scared, isolated, and desperate. They have been unintentionally isolated and marginalized by the medical community due to the lack of knowledge that Visual Snow is a real, legitimate syndrome that requires and deserves a diagnosis. As a result, there is unnecessary ambiguity surrounding the condition.

But sometimes, understanding what you do not have can be almost as important as what you do have. Many of these people are fearful that they are going blind, which is not the case. Some still do not understand that Visual Snow Syndrome is not an eye disorder. It is a brain disorder that manifests itself by the person seeing disturbing, intrusive images, dots, and lights 24/7. That is why the diagnosis of Visual Snow Syndrome is so difficult.

Iain: Could you share some of the main symptoms people should be aware of that could indicate they have visual snow?

Sierra: You can be born with or acquire Visual Snow Syndrome. It’s not unheard of for someone to see lights or dots (floaters, Entopic Phenomenon, etc.) in their field of vision sometimes. But if one sees this constantly, it is likely a symptom of Visual Snow Syndrome.

A hallmark sign of the condition is having a TV-like static across your entire field of vision (the same in both eyes). Photophobia and palinopsia are also typical for Visual Snow patients. The symptoms last 24/7 and do not go away. In addition to those already mentioned, accompanying symptoms usually include tinnitus and depersonalization. 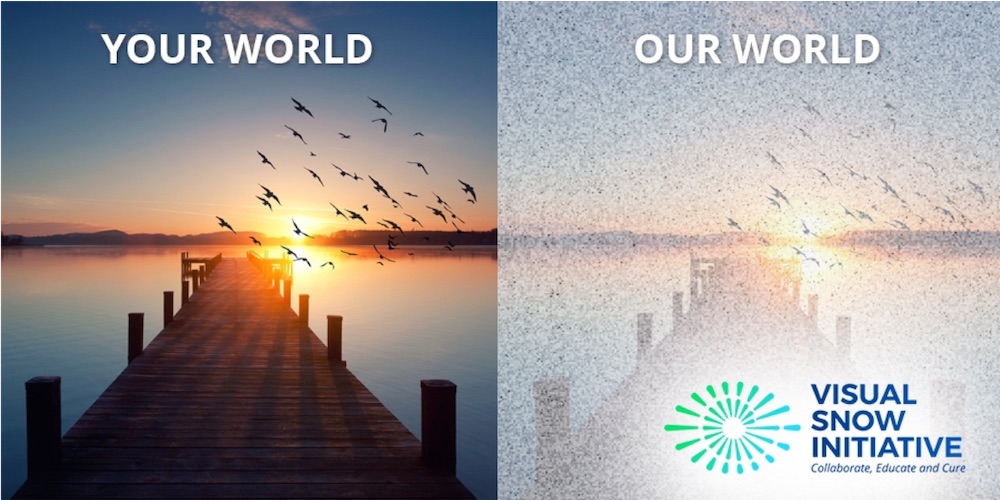 For a more extensive list of symptoms, please refer to:

Iain: How has it affected you and does that restrict your day-to-day life?

Sierra: Visual Snow Syndrome had made me extremely sensitive to all kinds of lights. This makes it challenging to drive, read things off projectors and laptops at school and work, TV/movies/concerts, The static and cluster of images, dots, and lights I see 24/7 makes it hard to focus my attention on one thing at a time since I’m seeing thousands of things in my field of vision at once. You have to garner a lot of willpower, diligence, and focus to complete simple actions. Daily tasks are exhausting. Sleep is often evasive since there are countless things you have to see even when you close your eyes to lie down.

As we work towards a treatment/cure, I have to try my best to work around all of these things and move forward with my life. There was a time these symptoms debilitated me physically and robbed me of any hope for a happy future. But now, I make an active effort to overcome my medical condition on a daily basis and manifest happiness through resilience and optimism. 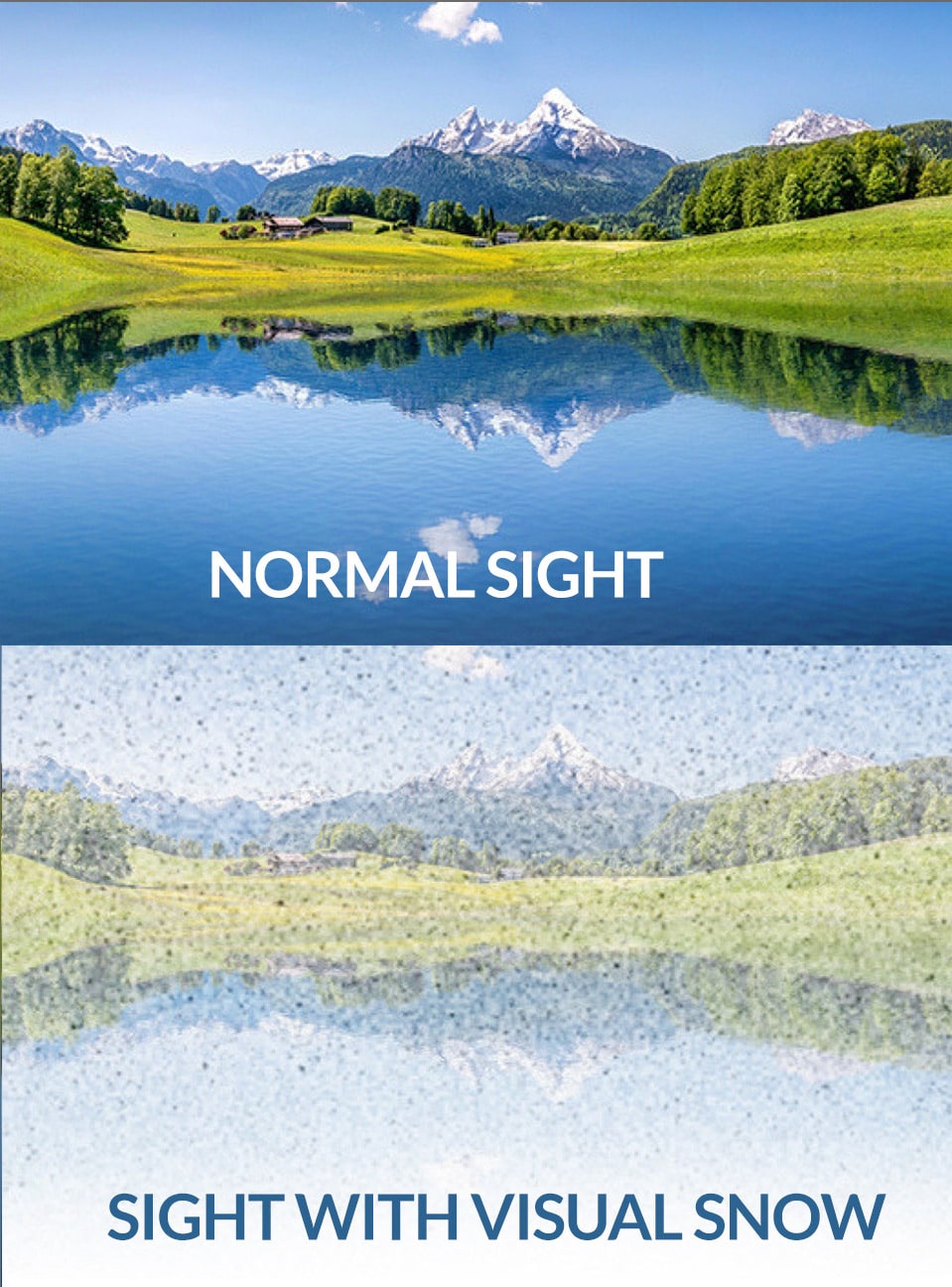 Iain: What were some of the obstacles and challenges that you faced when setting up the initiative?

Sierra: I never thought about obstacles or challenges. I resolved that something needed to be done for Visual Snow Syndrome, so my take was simply “Let’s do this!” VSI very quickly took on a life of its own. As momentum grew, it became easier to continue our mission. We received thousands of E-mails from people expressing their gratitude or praising our teams’ efforts and accomplishments. Having this condition myself, I know what others who have it are going through. The cause hits close to home. It is immeasurably gratifying to make a positive difference in someone’s life.

Iain: Can you tell us about your research project for 2019?

Sierra: We are currently funding Visual Snow research in London, England and Melbourne, Australia. We will be funding and conducting another study in Boulder, Colorado during the summer of 2019. Separately, we are working with a team of neuroscientists and computer programmers to offer a resource that we hope will improve Visual Snow symptoms and allow a better quality of life for those who have it. We also expect this to be available in the summer of 2019. Additionally, the first trial of customized lenses is just now being manufactured. We hope these glasses will reduce Visual Snow symptoms for individuals simply by putting them on. If this is successful, we intend to make an announcement and have them available through the VSI.

Iain: If you could collaborate with or get the support of anyone for your initiative, who would that person be?

All support is welcomed and greatly appreciated by VSI, whether it takes the form of legally recognizing the Visual Snow Syndrome, publishing an article, uploading a video, or posting about it on social media. Visibility and acknowledgement for Visual Snow Syndrome is essential to our cause.

Iain: What would be your advice to people in the entertainment industry that have symptoms of visual snow?

Sierra: Anybody can make a difference – anybody. If you have a following because you’re a recognizable figure, you definitely have an advantage. Use it to better the world. It is more valuable than money and far more rewarding.

If you have ever been dealt an unfortunate circumstance in life, then you can understand the heartbreak that comes with such difficulty. Sight is such an important sense; any contribution or effort made on your behalf (to raise awareness of otherwise) can mean the difference between suffering and a hope for a person whose had their life ambushed by Visual Snow Syndrome.

Iain: How can people support your cause?

Sierra: If you’re interested in supporting our cause, you can go to: visualsnowinitiative.org – Make a donation, offer to help, or send us an E-mail. We are open to suggestions. Together, we can get closer to a cure!